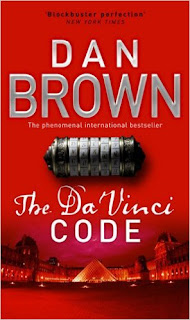 There are some books which I categorized as the food for the brain and "The Vinci Code" is also one of them. The Vinci Code is a fictional novel written by Dan Brown in 2003. This is a best seller book with millions of copies sold around the world; however, it has also remained controversial in many countries of the world because of reference of alternative religious theory according to which Zesus Christ has a daughter and he married Mary Magdalene unlike the present belief that he never married and neither he has any child. Due to this reason, this book remained in lot of controversy for showing historical facts in wrong manner.

I don't want to go much deeper into the controversy because I am going to review this book as a murder mystery novel. When you read this book as a book, then just after a few pages this book starts absorbing you in the story and put your mind into action to think about the next outcome. This book is written very well and in a very simple language; therefore, anyone can easily read it and understand it too.

The other good point about this book is that it makes you search about many things like history of Chirstainity, Holy Grail, Mary Magdalene, secret societies etc. The book present a well crafted mystery in front of us and as we read the book, we get involved in this mystery. Sometimes, we ourself become a detective and try to predict what will happen next.

If we read this book as a fictional storyline, then it is a great murder-mystery novel; however, when we associate it with a religion, then we lose the whole enjoyment. Though, I do agree that this book makes you think that there may be certain things which are hidden from the present world; however, we should not go much deeper into it while losing the fun of reading a great book.

We live in a free world and therefore, we must encourage such books which the freedom of expression. We should allow the reader to decide and take away from the book what they feel is right for them. In the coming times, all religions across the world will face such difficulties were people will ask questions about many unanswered questions.

I read this book as a book and not as a religious controversy; though, the controversy in this book pushed me to buy it and read it. As a book, it's a great book which offers you everything from a good story, bold character, fun, excitement and for your brain.